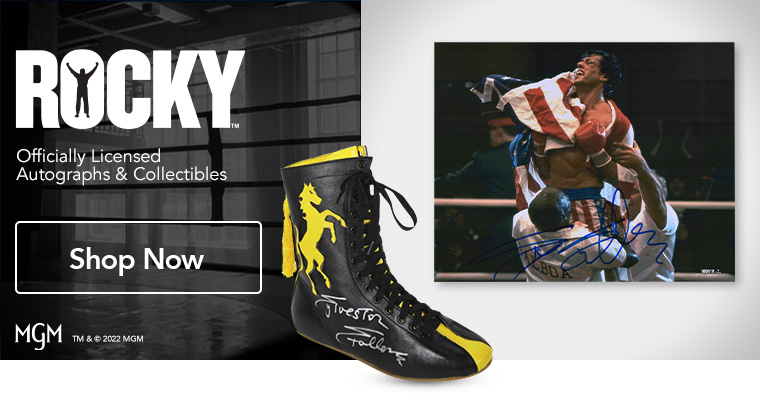 Welcome to HollywoodMemorabilia.com, your premiere destination for authentic entertainment memorabilia and Hollywood collectibles. Whether you're a serious celebrity autographs collector or a die-hard fan, you've come to the right place. Browse our huge online catalogue of products for Hollywood memorabilia signed by your favorite musicians and movie stars or celebrate your favorite television series and Broadway shows. In addition to a broad selection of autographed celebrity memorabilia, each and every item available on our site comes with a certificate of authenticity and is backed by our authenticity guarantee. Shop the entire online shop for collectibles that features a wide assortment of autographed from movie, television, music, theater, literature, history, and more!

For music lovers, there is wide range of rare autographed memorabilia from some of the biggest names in the industry, from artists that are touring all around the world and releasing amazing, chart-topping records to historic music icons that will never be forgotten. We carry a great selection of engraved and framed film and celebrity collectibles that boasts a variety of replica Hollywood signature displays, along with album and music posters from legendary talents such as singers Eric Clapton, Jimi Hendrix, Billy Joel, Paul McCartney and the Beatles, U2 singer Bono, and don't forget about country's rising star Taylor Swift. As a collector or fan of the King of Pop, sure to check out our extensive collection of Michael Jackson memorabilia, which includes framed plaques and photos, to honor the legend himself.

HollywoodMemorabilia.com is the web's leading source for original and autographed music posters as well as gold record displays, from such notables as Dean Martin, Johnny Cash and Frank Sinatra. With an eclectic set of signed instruments and signed albums available for sale, music fans can take home a piece of Hollywood history and commemorate their favorite artists achievements with items like Bob Dylan autographed drumheads, Rolling Stones signed drum sticks, Dave Matthews autographed guitars, and more. Honor the glory days of your favorite rock bands with autographs CDs and signed microphones from Jon Bon Jovi, KISS, Pulp Fiction, and Led Zeppelin. By shopping the vast selection of authentic music memorabilia, all music fans can add a piece of history to their collection with items autographed by legends, such as the King himself, Elvis Presley, and renowned Boston rockers Aerosmith, to current superstars, including BeyoncÃ© and Eminem.

As for the movie buffs out there, there is a massive collection of movie memorabilia available with products signed by actors and actresses of all eras. Fans of current features on the big screen to old Hollywood movie fans can preserve their favorite motion pictures with thousands of modern and vintage, signed and unsigned movie posters, including rare posterprint and masterprint versions of domestic and international cinema posters. Shopping for a special gift for the Hollywood fan in your life, you can't go wrong with framed movie posters and celebrity signed photographs from newcomers to legends, such as Al Pacino and Johnny Depp, or Marilyn Monroe to Hollywood sweetheart Sandra Bullock.

If you are looking for any collectible item from any Hollywood superstar or celebrity, the solution is featured in the wide assortment of celebrity autographed memorabilia from the greatest actors and characters of all-time, such as cultural icon Clint Eastwood, legendary agent James Bond, and James Gandolfini of the Sopranos. In addition to a huge collection of autographed movie photos and posters, fans and collectors will find signed scripts and cards from every film celebrity, such as Inception star Leonardo DiCaprio to Sylvester Stallone of the unforgettable Rocky movies.

If you're looking for autographed star photographs and signed celebrity pictures from entertainment's greatest flicks all across movie history, you can't miss with great investments on items hand-signed by the likes of George Clooney, Tom Cruise, and Arnold Schwarzenegger. Don't forget to shop for one of a kind celebrity action figures from the action-packed movies, like Star Wars, Superman, Spiderman, Iron Man, and Batman, as well as items signed by the man behind the Marvel comics and characters, Stan lee. Movie fans can add their favorite movie to their home or office by shopping the Hollywood memorabilia from motion pictures of all generations and genres, from The God Father and Back to the Future to the Wizard of Oz and Harry Potter. Also be sure to find the perfect addition to your collection and display piece by perusing the variety of unique shadowboxes that are handmade framed collages of movie or music stars, beautifully framed and perfect for any caliber memorabilia collection.

Be sure to browse through the selection of limited edition T.V. memorabilia, which includes posters and photos from all of your favorite television personalities and superstars. Along with our great selection of signed photos, the wide product offering features photos from shows of yesterday and today. From current favorites like CSI New York, the Simpsons, and House of Cards, to classics, such as Happy Days with Ron Howard, Sex and the City, Friends, the iconic I Love Lucy starring Lucille Ball, and Seinfeld, there is a piece of television memorabilia for every type of fan and collector out there.

Don't forget to check out the vast assortment of sports memorabilia, where you can find signed photos and other autographed collectibles from a wide variety of athletes across all major professional sports!